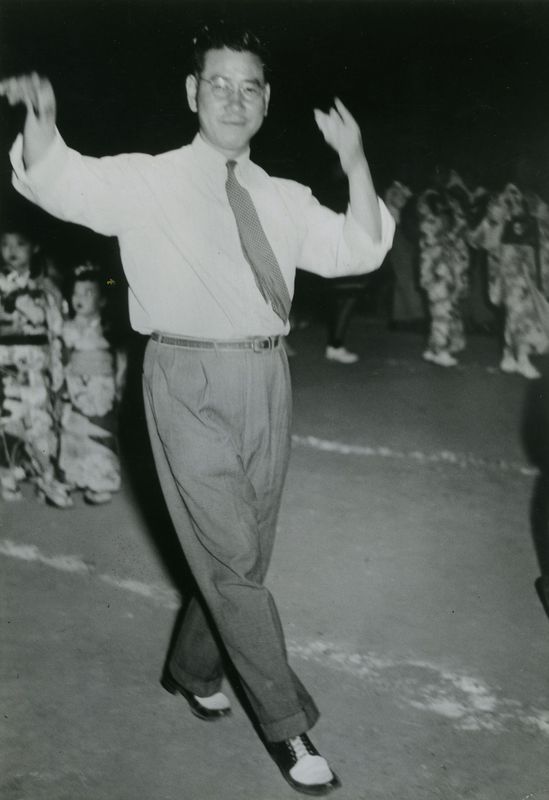 Yoshio Iwanaga (1900-1950) was a Japanese Buddhist minister who moved to California in 1930 and introduced doyo buyo (children’s dance) and bon odori (obon dance) to numerous communities along the North American West Coast. Obon dancing may have taken place on a small scale at kenjinkai (prefectural associations) and other Japanese American gatherings prior to Iwanaga’s arrival, but these occurrences remain largely unverified. Following Iwanaga’s direction, bon odori was recontextualized as a Jodo Shinshu Buddhist practice utilizing music and dance from across Japan. He taught bon odori in California, Oregon, Washington, and British Columbia, and led two large performances of bon odori in the 1940s at the International Exposition at Treasure Island and the fiftieth anniversary of the Buddhist Churches of America (BCA). He and his wife, Helen Chizuko Iwanaga, were appointed the directors of the Music and Recording Department of the BCA and completed a collection of gatha (Buddhist hymn) records just months before he passed away in May 1950.

Telegrams of condolences were received from across the United States and virtually every BCA minister attended his funeral. Iwanaga was remembered as a popular and progressive minister, beloved by all, with an irresistible wide grin and light dancing feet. His contributions to music and dance within the Japanese American Buddhist community were widely acknowledged and the continued popularity of bon odori in North America is due in large part to Reverend Iwanaga’s pioneering activities.