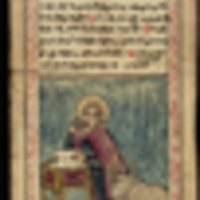 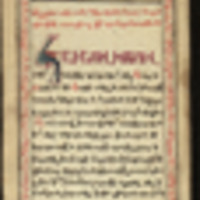 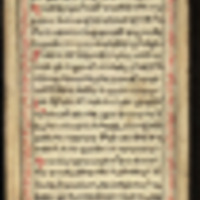 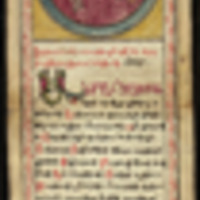 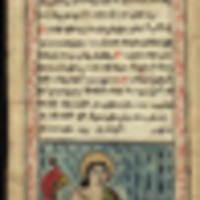 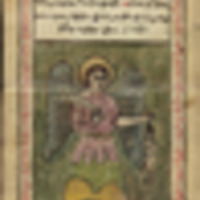 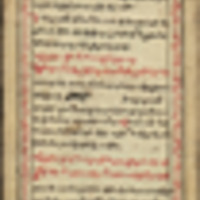 This prayer roll contains illustrations, prayers, and selections of the Holy Gospel.

Manuscript rolls were commissioned by their owners and the content reflects the owner's concerns and prayer requests.

Second panel from top: Christ's Apostles.  Each apostle is pictured in the order of his call by Jesus to His service.  St. Peter, the first called, is shown in the circular frame at the top left of the illustration.  He is identifiable by the keys he holds as the gatekeeper of Heaven.  Each apostle wears a robe of blue, the color representing the law or word of God.

Center panel: Christ rising out of Chalice.  Jesus again holds his hands in the position of a blessing known as the Monogram of Christ.  His vestments of purple and the act of rising from the chalice signify the Christian belief of His resurrection and the promise of eternal life.  He rises over the Cross of his crucifixion and the crossed spears used to spill his blood.

Second panel from bottom:  Christ's Apostles.  The last of the twelve apostles featured here is Matthias, called to serve the Lord after the betrayal by Judas Iscariot.  Even though the portraits of the apostles are not continuous on the roll, the illustrator took care to maintain aesthetic continuity between the two panels by duplicating the circular framing and simple artistic flourish.