The Warriors of the Word

These hand-illuminated pages, originally part of a Coptic Christian prayer book, give a view into the religious practices of eighteenth-century Copts.  These pages also reveal that transcripton by hand was still being practiced by the Egyptian Coptic community during the period.

The text is written in both Bohairic Coptic and Arabic, with a few headings in Greek, demonstrating the Christian clergy were still using Bohairic Coptic for liturgical purposes even after Arabic had become the colloquial language of Egypt.  The small red dots, or rubrications, within the Arabic portion of the text are used as vocalization markers in the same way they are used in the Qur'anic texts included in this exhibit.

This manuscript was transcribed for the purpose of hourly prayers and hymns, much like the Italian Book of Hours displayed in this collection.  It is likely that the texts would have been read and sung by a Coptic priest in a church setting for the daily rituals of the pious.

The illustrations within the manuscript testify to the multicultural influences that existed in the region.  Cresting the top of each prayer page are hand-drawn archways that, in design, reflect the interlacing geometric patterns used in Islamic decoration.  In contrast, the illumination pages of warrior saint figures share more with Eastern Christian visual culture.  The images of Saint George, Saint Theodore the Eastern, and Saint Mercurius are not unlike equestrian representations seen in Eastern Orthodox, Armenian, and Ethiopian iconography.  This interplay of influences helps to explain both the complexity of the manuscript's text pages and the inclusion of the warrior saint image illustrations. 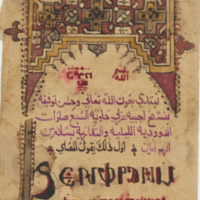 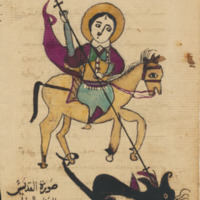 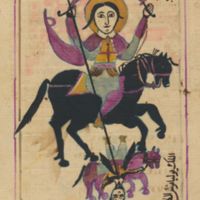 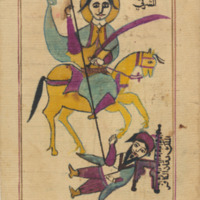