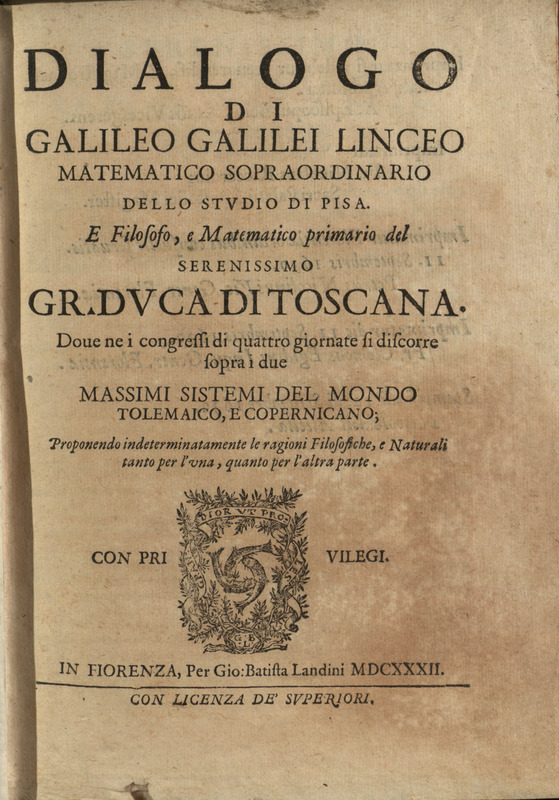 These pages come from what is undoubtedly the most significant early printed work in the PSU library collection: Galileo Galilei’s Dialogue Concerning the Two Chief World Systems. Published in 1632, the book is a fictive dialogue regarding the nature of the cosmos. Beyond its scientific interest, it is also of broad historical importance given that it was directly responsible for its author’s arrest, trial, and condemnation.

Although Copernicanism—the idea that the planets revolved around the sun—had been formally declared heretical in 1616, Galileo became emboldened enough to defend it again as his old friend Maffeo Barberini was elevated to the papacy as Pope Urban VIII in 1623.  The argument is presented as a simple dialogue about the relative merits of a heliocentric or geocentric solar system between Salviati (a Galilean), Simplicio (the church’s view), and Sagredo (an impartial observer). But in reality, the book effectively dismantles common anti-Copernican arguments, and puts the most foolish lines in the mouth of Simplicio, the church’s stand-in. 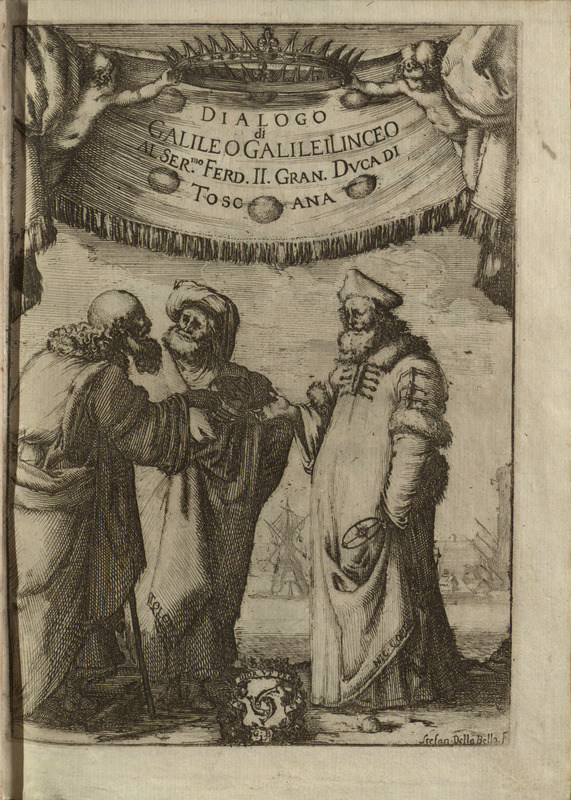 The frontispiece, created by renowned engraver Stefano della Bella, shows representatives of each of these schools: Ptolemy and Aristotle, defenders, of a geocentric universe, in debate with Copernicus, who represented the Galilean heliocentric view.  (Each is neatly labeled along the hem of his garment.)  The book is dedicated to author’s powerful patron, Ferdinand II, the Grand Duke of Tuscany, whose emblem—three balls—appears in the upper part of the engraving.

In Galileo’s case, however, even a powerful protector was unable to prevent the author’s eventual condemnation and house arrest at the hands of the Roman inquisition in 1633—as well as the banning of this very book. PSU’s volume appears to have come from the collection of Stillman Drake, the greatest Galileo scholar of the twentieth century.