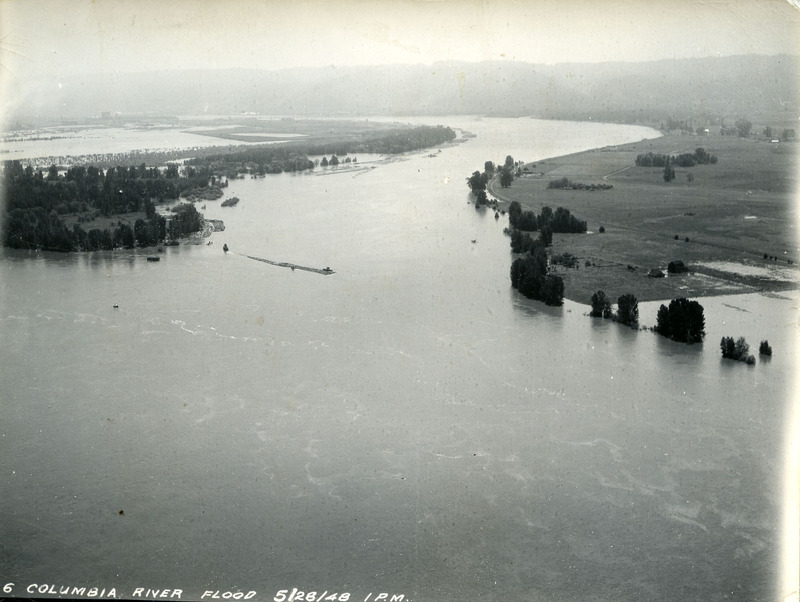 The mouth of the Willamette River flowing into the Columbia River at flood stage, May 28, 1948.

The timeline for the Columbia River flood activity began on April 19 and 20, 1948, when state and federal agencies met with the Red Cross to discuss coordination among their departments in case the river flooded.  The U.S. District Engineer for Oregon referenced the conditions leading up to the flood of 1894 and pointed out that the winter and spring of 1947-48 held many parallels, and that a disaster preparedness plan was needed in this event.

By Thursday, May 20, the Crown-Willamette sawmill in Camas, Washington, had reduced its production to 30 percent (Oregonian, 5/26/48).  Flood waters had already forced the closure of the Stebco lumber mill in Vancouver, as well as four other mills in Ridgefield, Washington.

On Sunday, May 23, rising water at the Crown-Willamette mill at Camas broke up six log rafts, scattering 1,800,000 feet of logs into the river.  Most were recovered by Monday afternoon (Oregonian, 5/25/1948).  In Vancouver, the lower half of the airport flooded, forcing engineers to use pumps to drain the water, but they were ordered to be removed for interfering with traffic.