The Fire and the Hammer 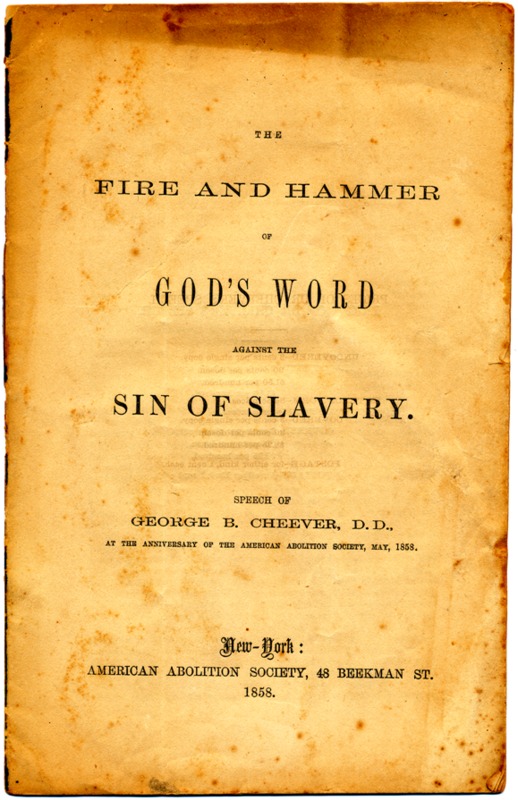 The Fire and Hammer of God’s Work Against the Sin of Slavery.

Speech of George B. Cheever, D.D., on the anniversary of the American Abolition Society, May 1858

Whether Christianity condemned or sanctioned slavery became a matter of fierce dispute as many religious leaders joined in the abolition movement.  In this speech, Rev. Dr. George B. Cheever, based in a congregation in New York City, uses the Bible, logic and reason to argue against the institution of slavery, and in particular the chattel form for its practice of enslaving the unborn children of slaves.  Published in 1858, a year after the Dred Scott case, Cheever offers a scathing critique of the decision, which upheld the constitutionality of chattel slavery and denied forever the possibility of citizenship for African-Americans.  His speech was printed by the American Abolition Society for ready distribution, part of a prevalent pamphlet culture.  Under certain pro-slavery administrations, the U.S. Postmaster General refused to allow mail carriers to carry abolitionist pamphlets to Southern states.

Excerpt:
"By thus laying our grasp on an unborn race; by saying beforehand to immortal beings, the work of the Creator, You can not come into God's world but as infant slaves, articles of property an merchandise, but with a curse of our national justice and equity branding you for the slave-pen and separating you from the manhood of all mankind; by this robbery from God and man we become a nation of men-stealers -- a community of baptized Thugs for the kidnapping of the children of four millions of people, and the assassination of their personality."