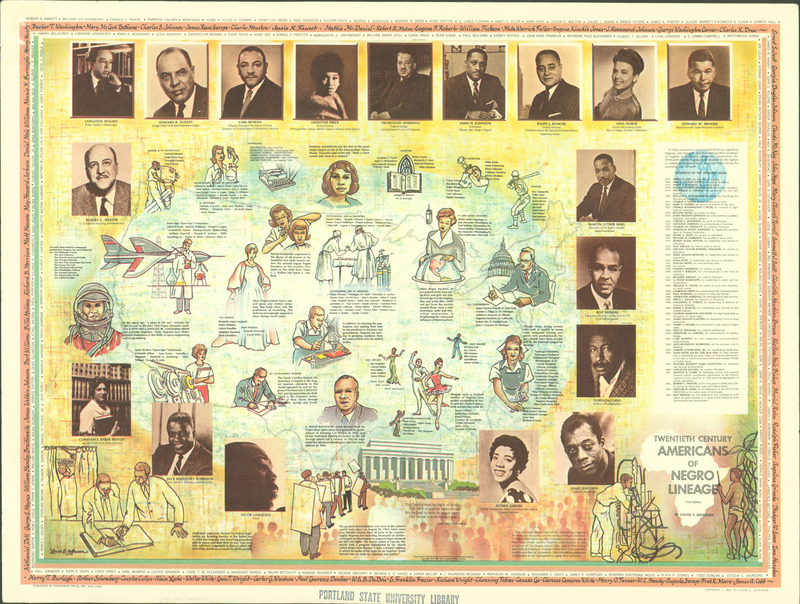 Louise E. Jefferson learned to draw from her father, a calligrapher for the United States Treasury Department.  She pursued fine and commercial art in college, moving to New York.  Struggling financially, she took freelance work, designing pieces for a number of African-American publications, the YMCA, and several major publishing houses.

A freelance job with the National Council of Churches’ publishing operation, Friendship Press, led to a full time position, and she eventually became the press’ art director, likely becoming the first African-American woman to hold such a position.  In 1936, Georgia’s governor Eugene Talmadge banned a songbook she illustrated with images of black and white children, ordering all copies to be burned.

This is a miniature version of a large wall-poster, produced for classroom use, circa 1965.  Noting, "This pictomap shows some of the outstanding Negroes in American life today and the various fields of endeavor in which others have excelled," the poster incorporates portraits of prominent African-Americans, taken by Jefferson herself, with drawings of African-Americans engaged in other professions.  It also lists the Spingarn medal, an annual award of the NAACP to an African-American for outstanding achievement.