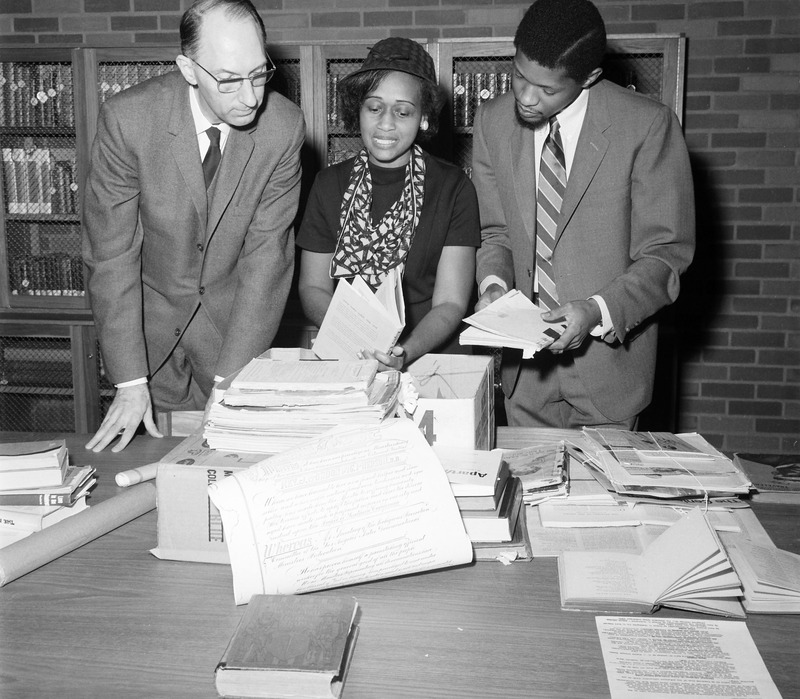 A Portland Couple Thursday donated to the Portland State University Library about 140 books and papers tracing the thread of black life from Africa to America through religion, science, literature and war.

Many of the items given to the library by Mr. and Mrs. Osly J. Gates, 4215 SE Bybee Blvd., were collected by Mrs. Gates’ father in the late 19th and early 20th centuries.

Among the rare editions is a November, 1887, copy of Century Magazine with unusual etchings of slaves at work on a Louisiana sugar plantation.

First edition histories of the Spanish American War and World War I, detailing contributions of black soldiers, are also included.

Mrs. Gates said her father, the late Rev. J. Gordon McPherson, was born in the late 1800s in New Orleans and spent most of his life in Louisiana collecting cultural and historical material on black people.

Theodore Grams, acting director of the library, who accepted the Gates collection in a brief ceremony at the library, said it was unusual because of the 35 first editions.

Also, he said the material was valuable because it traced black history through a variety of fields, including histories of black churches, articles on discoveries by black scientists, and black educational achievements.

The static nature of social development for black people was illustrated by a 1929 copy of a Portland newspaper, The Advocate, announcing a conference on civil rights.

Mrs. Gates said she hoped the collection would help provide an understanding of black people through their history on two continents.