A Mortgage Deed for Two Slaves 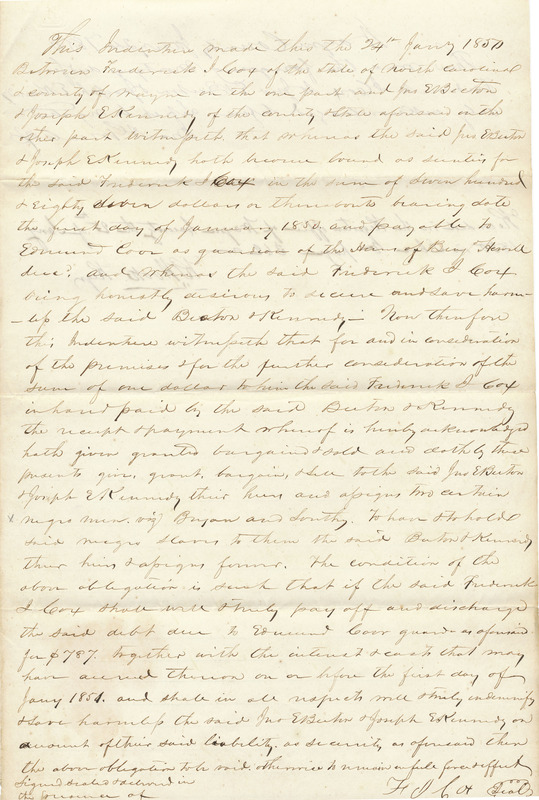 This legal document records the arrangements made between J.E. Beeton, J.E. Kennedy and Frederick I. Cox, who is unable to repay a debt of 787 dollars “or thereabouts” to a certain Edmund Coor, conservator of the estate of Benjamin Howell.  Beeton and Kennedy promise to secure the debt for Cox to Coor.  In return, Cox transfers ownership of two slaves, Bryan and Southy, to Beeton and Kennedy as collateral. If Cox repays the debt within four years' time, he may reclaim the slaves.  Otherwise, they will remain the legal property of Beeton and Kennedy, who will become responsible for any unpaid debt to Coor.  The hurried penmanship and use of abbreviations and shorthand in this document, such as “Jany” for January, as well as its nature, suggest that this is one of three or more copies prepared by the County Registrar.

Transcription:  This indenture made this the 24th Jany [sic] 1850 Between Frederick I. Cox of the state of North Carolina & County of Wayne on the one part and Jno [abbreviation for John] E. Beeton & Joseph E. Kennedy of the county and state aforesaid in the other part witnesseth that whereas the said Jno E. Beeton & Joseph E. Kennedy hath become bound as security for the said Frederick I. Cox in the sum of Seven hundred & eighty seven dollars or thereabouts bearing dote the first day of January 1850. and payable to Edmund Coor as guardian of the Heirs of Benj [abbreviation for Benjamin] Howell due? and whereas the said Frederick I. Cox being honestly desirous to secure and save harm- -less the said Beeton & Kennedy_ Now therefore this Indenture witnesseth that for and in consideration of the promises & for the further consideration of the sum of one dollar to him the said Frederick I. Cox in hand paid by the said Beeton & Kennedy the receipt & payment whereof is hereby acknowledged hath given granted bargains & sold and doth by these pursuits give, grant, bargain, & sell to the said Jno E. Beeton & Joseph E. Kennedy their heirs and assigns two certain negro men. viz Bryan and Southy. To have and to hold said negro slaves to them the said Buton & Kennedy their heirs & assign forever. The condition of the above obligation is such that if the said Frederick I. Cox shall will & truly payoff and discharge the said debt due to Edmund Coor guardian as aforesaid for ø 787. Together with the interest and cash that may have accrued thereon on or before the first day of Jany [sic] 1854. and shall in all respects well & truly indemnify & save harmless the said Jno E. Beeton & Joseph E. Kennedy on amount of their said liability as security as aforesaid then the above obligation to be void. Otherwise to remain in full force and effect. F, I, Cox Signed, sealed & delivered in the presence of Jno A Green On Reverse: Wayne County Jany [sic] 24 1850 Then was the forgoing mortgage deed from Frederick I. Cox to Jno Beeton & Joseph Kennedy duly acknowledged before Sent to be registered. Jno A Green Recorded in the Registers office of Wayne County the 25th of Jany 1850 in Liber V page 362 R. Hook Regr. [abbreviation for Registrar]