"In my imagination I already saw myself wielding my pen as well as my voice in the great work of renovating the public mind, and building up a public sentiment, which should send slavery to the grave, and restore to ‘liberty and the pursuit of happiness’ the people with whom I had suffered."

Frederick Douglass escaped from slavery to become a leader of the abolitionist movement.  A gifted orator, he traveled through the Northeast and Europe, speaking out against slavery before eventually settling in Rochester, New York, a center of abolitionist activity.  In 1847, he began publishing a newspaper, the North Star, that served as a platform for discussing developments in the abolition movement.  In 1851, the name was changed to Frederick Douglass’ Paper, to avoid confusion with a number of other papers with "Star" in the title. 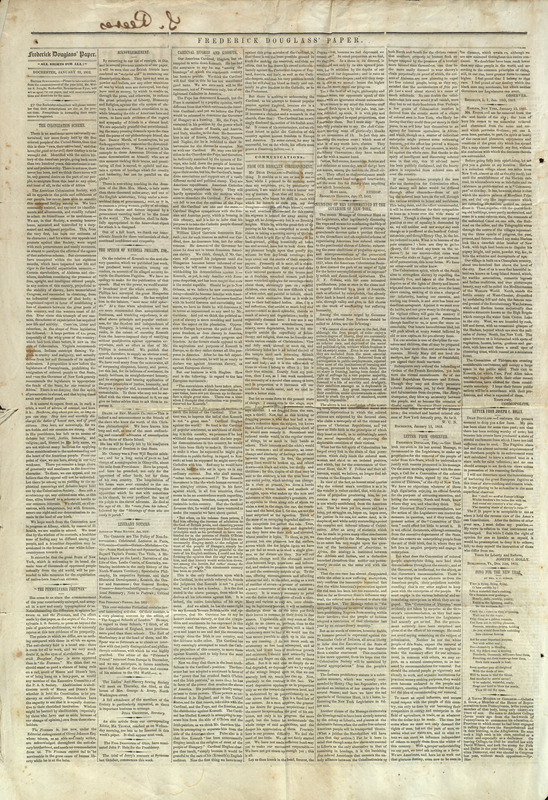 In addition to abolitionist issues, the paper addressed current events, international politics, scientific discoveries, and literature. This issue evaluates and finds plausible a theory that a subterranean river connects the Great Lakes; features an article by an “Englishman” warning against the “heterogeneous jumble of despotism” that will result from Louis Napoleon's reign; reprints a natural remedy for a dog bite that was tested on a sheep; advises young men to steer clear of chewing tobacco, which induces a “dangerous precocity” as well as “softening and weakening of the bones;” and, on the final page, prints an Aesop fable and a poem by Goethe.