Dennis Payne was active in Black issues during the turbulent 1960s.  He related the mood on the Portland State University campus during the period in his oral history:

When we (BSU) started raising questions of relevancy of class offerings, guest speakers, and services offered black students and the black community, the first thing the whites did was run to their black student body president, Andrew Haynes, a graduate student, and ask him for his opinions. Of course, his opinion was "that there was no need for any changes and that the school didn't need to recognize the BSU."

With Andy and his positions, PSU was a very interesting place. Black students did not know Andy and surely were not going to let their needs be denied because of him. Andy was from somewhere back east and we were from the local community. We represented the aspirations of the community and were not willing to compromise our positions on creating new opportunities for black students at PSU. We now had over 50 black students on campus, had formed our own student group, BSU, and we focused on making changes that would represent Black People. We were making demands that would change PSU for years to come and improve the lives of Black People in Portland. 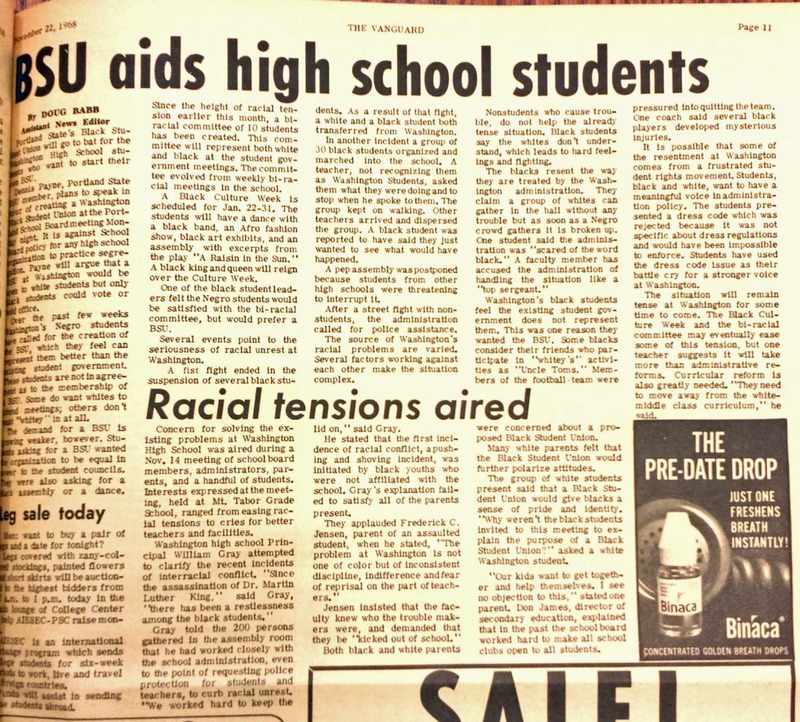 The Black Student Union at PSU made several demands of the administration.  Dennis Payne details the main areas of conflict:

The first demand was that all planning by PSU for the Black Community be stopped and the BSU be allowed to review and amend them to meet our standards. We also demanded a final veto over anything involving Black People.

We discovered that dollars from Student Incidental Fees were being used for non­student needs, and we joined other students to demand that this practice be stopped and the money be reallocated to support student groups. We demanded that the Student Activities Office form a Black Cultural Affairs Board to allow us to bring Black speakers, playwrights, and others to our campus.

We also demanded that coursework be developed to represent our history, cultural and contributions to society, Black Studies. We also demanded Black faculty members be hired and that they and their coursework be offered in the Black Community, Albina Presence. The Martin Luther King, Jr. Scholarship Fund of Oregon was also started to support Black students' opportunities to attend college.