Notes on an Interview with Myrtle Carr 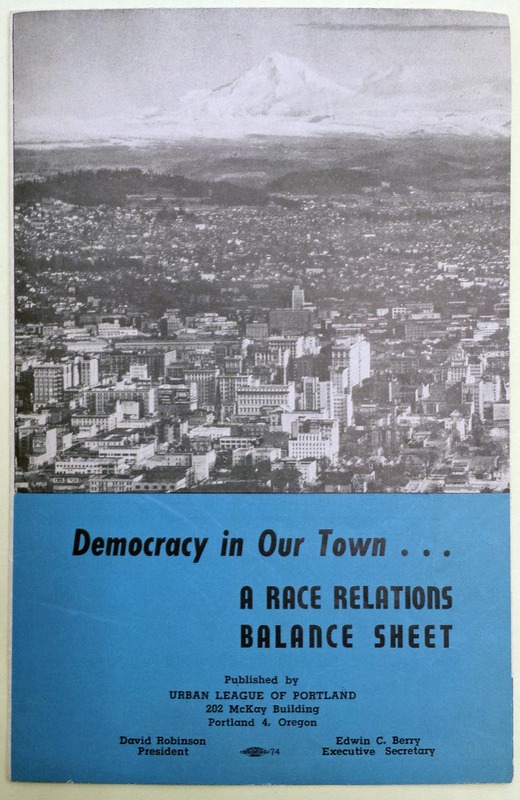 Notes on the Oral Interview with Myrtle Carr

Myrtle Carr, a long-time resident of Portland, Oregon, was interviewed in her home on March 1, 2010.  This session was part of a series of interviews for a student project entitled PSU Civil Rights in Oregon: Oral History.  The interview was conducted by Pearl Jones and was transcribed by Shalae Moore on March 28, 2010.

Myrtle Carr migrated to the Northwest in 1945 from Cleveland, OH.  She was involved with the Urban League of Portland from its early days starting around 1955.  She served in a number of positions including volunteer, receptionist, secretary, and office manager; she ended her career as a job development specialist.

Unfortunately, the audio recording of the interview did not survive.  Its content was reconstructed from memory by the interviewers Pearl Jones and Shalae Moore.  Although abridged, the main points that were discussed are recollected here: Carr had a long history of service to the Urban League of Portland and the St. Philip the Deacon Episcopal Church in Portland.  She related some of the challenges faced by African Americans during the period after WWII.  Housing discrimination was a major area of concern to the Urban League, and the accomplishments over the next thirty years in this area were discussed.

Since the audio did not survive, Carr's oral history presents an opportunity for another historian.  Myrtle Carr was in Portland during turbulent times in civil rights, and her experiences need to be captured in a new interview.  She met Dr. Martin Luther King in 1961 when he came to Portland.  This story is not reflected in the existing transcript and would be an excellent addition to her story.  She was also in Portland during the Vanport flood of 1948.  Her reflections on how this affected the community are equally valuable.

The Urban League of Portland was founded in 1945, the year Carr arrived in Portland, and her involvement during the formation of the organization and her 36 years of service in an administrative capacity are also key points that can be fleshed out.  The programs and goals of the Urban League throughout her service can be underscored by her “insider” view of the League. As an office manager, Carr's position gave her a valuable perspective on the running of the organization.

Myrtle Carr’s years of service to the Urban League and her experiences of housing discrimination, civil rights struggles, and pivotal successes in the Black community are of vital importance to capture for this online collection.

Abridged transcript as it was recalled by interviewer:

This is the transcription of the interview of Ms. Myrtle Carr, done on March 18, 2010, in her home, at the time of 2pm, by Pearl Jones and Shalae Moore, for the Portland State University class Civil Rights in Oregon.

PJ: Where did you come from to Portland, and when and how did you decide on Portland, Oregon?

MC: I came from Cleveland, Ohio on May 25, 1945 by invitation of my Aunt, with whom I lived with till I met my husband.  We had one biological daughter and one stepdaughter.

PJ: What were some of the obstacles you and your family encountered?

MC: Finding places to eat, to live and to work.

PJ: What years were you active with the Urban League?

MC: I worked with the Urban League for 36 years in a variety of capacities, from receptionist, secretary, office manager, and ending as job development specialist.

PJ: What was the purpose/intent of the Urban League, and at the time did it achieve its purpose?

MC: To make a better place for Blacks to live by seeking ways and means for Blacks to obtain housing and employment. The Urban League is still striving towards that goal today.

PJ: What obstacles did the Urban League face getting started, and what impact did they have on you?

MC: To be taken seriously. In the beginning, the Urban League offices were housed over a business that had a "serve whites only" sign in their window.

PJ: What prompted you to get involved with the Urban League?

MC: I went seeking employment and wound up volunteering, and then was hired and worked there for over 30 years. I became very committed to their purpose and wanted to help that purpose to be met.

PJ: As a result of the Civil Rights movement, especially here in Portland, do you feel things have or haven't changed enough and is another "movement" of sorts needed?

MC: Yes, to a certain level. Housing is better and obtainable along with employment. Quality education is still an issue. Another movement of sorts is not necessarily the answer due to the different mindset of the now generation--all don't feel the same on the issues, therefore all won't get involved to make a change.

PJ: If you could do it again, would you, and what would you do different and expect what impact on others would you want?

MC: Yes, I would be more focused, more prepared and visible, would ask for more help from businesses and the community. I would use more of the campaign format-informing people of the issues and of the suggested path for change.

PJ: Based on your experience, what words of wisdom, encouragement or advice would you like to share with our future readers/leaders?

MC: Prepare yourself, stay in school, educate yourself with the issues and the communities they affect, get involved and be dedicated with determination to make a change happen for a better quality of life for all, especially your children and grandchildren.

Quote from Ms. Carr: "Things might seem easier now, but people need to know and remember that the Urban League laid the foundation for this easiness that's being experienced. We still have a ways to go to reach equal justice, equal education and an equal life for all."