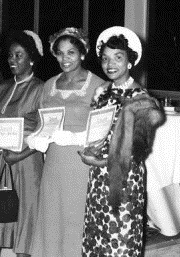 Willie Mae Hart (center) receiving certificates for having 100% membership in the Urban League at the 15th annual meeting at the University of Portland. Source: OSU Digital Collections.

After his election in 1960, President John F. Kennedy recommended Willie Mae Hart to the National Council of Negro Women, believing that she would be an excellent candidate to start a chapter of the group in Oregon. Hart was a founding member of the organization's Portland chapter, which called itself the Council of Negro Women.

"And so that is why after he [John F. Kennedy] passed--well he had laid out everything for the Job Corps, how he wanted it, what he wanted, and what have you, and, of course, you know he was  killed. And President Johnson knew what he was about to do, trying to do, and he fulfilled everything. And I was sent a letter that the needed, that they would like to have a Council here. And so because of the Job Corps and what have you, they were going to work with it. So I had a group of people that we just had parties, and we changed our name and called it the Council of Negro Women. (laughter) And that's how it was started."